For the longest time I never knew what the title “From the New World” referred to.  I knew Dvořák was a Czech composer but didn’t know he ever spent any time in America.  It wasn’t until I was reading a biography on the composer that I discovered he spent time in the USA as director of the National Conservatory of Music (1892-95) and hence made the connection that the “New World” he referred to was the USA. It’s easy to forget that in Dvořák’s time the USA was still in relative infancy in comparison to the long, long history of the European nations.

It seems apropos that the first classical piece of the “Album Night” series was written on American soil and contains many American influences.  During his time in America, Dvořák was inspired by the Native American and African American melodies and spirituals he was exposed to. He also stated that the scherzo (third movement) was based on the scene in Longfellow’s Hiawatha where the Native Americans dance during a feast.  So as not to get too American, the selected performance of Dvořák's Symphony No. 9 "From the New World" is conducted by Czech-born Karel Ančerl and performed by the Czech Philharmonic.

Here are some items to help you identify if you’ve obtained the proper performance to listen to.  I believe there are two recordings of Karel Ančerl and the Czech Philharmonic performing this piece but the one we are interested is the one from 1961.  Each movement should have the following approximate play times:

If you are listening on Tidal, here is the link to the album (only the first four tracks apply):
https://listen.tidal.com/album/30861143

Here are a couple of album covers that may help too: 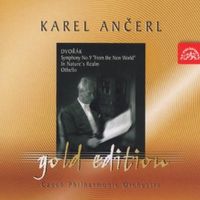 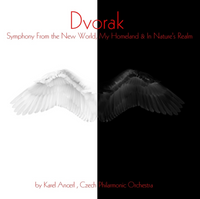 If you have any questions or difficulties finding the proper performance you can reach me via the contact page.

‘See’ you on Wednesday, September 21 at 9pm EDT for Dvořák's Symphony No. 9 "From the New World"' by Czech Philharmonic Orchestra; Karel Ančerl!

Dvořák's Symphony No. 9 "From the New World"

Share
**IF YOU DO NOT SEE THE CHAT ROOM BELOW THIS LINE, PLEASE REFRESH YOUR BROWSER ONE TIME AND IT SHOULD APPEAR**